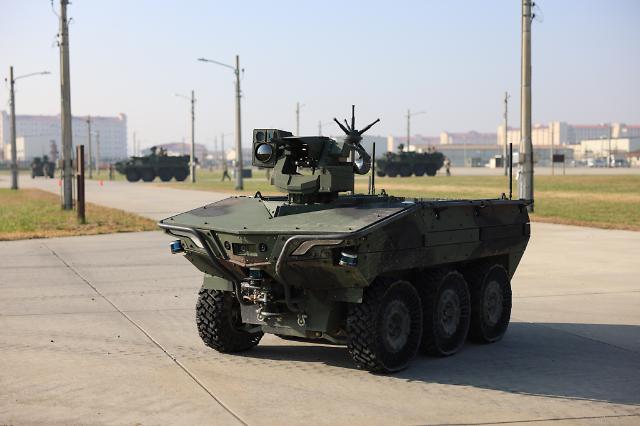 Hanwha Aerospace said that the demonstration of its unmanned ground vehicle (UGV) codenamed Arion-SMET was made at the request of the U.S. Army DEVCOM Ground Vehicle Systems Center at a U.S. military base in Pyeongtaek, about 60 kilometers (37 miles) south of Seoul, watched by U.S. military officials including Brigadier General Mark A. Holler, deputy commanding operations general of the Eighth Army.

In October, Arion-SMET was selected for the U.S. Defense Department's foreign comparative testing (FCT) program, which tests items and technologies of allies, paving the way for potential cooperation with the U.S. military’s future modernization programs. This was the first time that a South Korean unmanned weapon system has joined the U.S. Army’s competitive field test and evaluation program.

"We will discuss the pilot operation with U.S. troops in South Korea and participate in the U.S. military's rapid acquisition program by fully carrying out the performance comparison program of the U.S. Department of Defense," Seo Young-woo, head of Hanwha Aerospace's land systems business division, said in a statement.

The two-ton six-wheeled intelligent vehicle was built primarily for supporting infantry operations such as transporting munition and weapons, evacuating the wounded, remote-controlled or autonomous reconnaissance and surveillance, and close combat support.

The demonstration in Pyeongtaek focused on remote autonomous driving, obstacle avoidance, autonomous return, and gunfire detection. Arion-SMET has a smart autonomous return function that restores itself or returns to its first starting point even if remote communication is cut off in mountainous terrain.

By attaching an additional vertical expansion device up to 6m high, it is possible to detect people and objects within a range of 4.0 km. Arion-SMET is armed with a deep neural network (DNN)-based remote-controlled weapons station (RCWS), which can detect and track enemy soldiers, localize the source of gunfire, and fire back. Its shooting requires approval from a human operator.

The vehicle capable of driving up to 100km when fully charged has a maximum speed of 43 km on paved roads and 34km on unpaved roads. It can carry up to 550kg and features autonomous off-road navigation, autonomous homing, devices for tethering to follow a soldier or vehicle, and software for supporting manned and unmanned teaming (MUM-T) operations.

South Korea is trying to secure core technologies for MUM-T, which is the cooperative employment of unmanned assets with traditional manned platforms. MUM-T operations combine the strengths of each platform to increase situational awareness, allowing troops to conduct operations that include combat support and intelligence, surveillance, and reconnaissance missions.