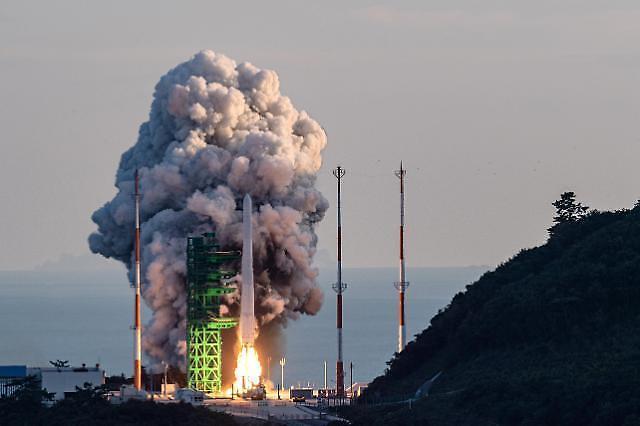 SEOUL -- The proposed development of a next-generation launch vehicle capable of thrusting bigger payloads for lunar or Mars exploration secured government approval after President Yoon Suk-yeol unveiled a space roadmap to land a spacecraft on the moon in 2032 and on Mars in 2045.

The Ministry of Science and ICT said that the development of a two-stage projectile codenamed "KSLV-III" passed a preliminary feasibility study on November 29. The KSLV-III project would cost some 2.01 trillion won ($1.5 billion) from 2023 to 2032.

KSLV-III will use five 100-ton multi-stage combustion cycle liquid engines clustered for its first-stage projectile and two 10-ton liquid engines for the second stage. Re-ignition and thrust control technology will be applied to facilitate the development of reusable projectiles that can drastically reduce costs.

Yoon has called for the establishment of a state aerospace agency like NASA and the early development of a new launch vehicle, saying "the dream for a space power will not be a distant future, but an opportunity and hope for children and young people."

The science ministry said the next-generation projectile would be used three times to verify the performance of a moon orbit test satellite in 2030 and launch the lunar lander's preliminary model in 2031 and the final model in 2032. "We cannot survive global competition for space development without our own projectile technology," Kwon Hyun-joon, a ministry official in charge of space, nuclear and big science policy, said in a statement.

KSLV-III will be more advanced and larger than its previous version, Nuri, which is a three-stage indigenous rocket that put satellites into target orbit in June 2022. The next-generation launch vehicle will be designed to thrust up to 10 tons into low orbit and 3.7 tons into a geostationary transfer orbit, while Nuri, also known as KSLV-II, can thrust up to 3.3 tons of payload into Earth's low orbit.

Nuri is 47.2 meters long and weighs about 200 tons. The first stage uses a cluster of four 75-ton liquid engines. A 75-ton liquid-propellant engine was designed for the second stage and a seven-ton liquid engine for the third stage. Nuri uses a gas generator engine, which has lower thrust power than multi-stage combustion engines.

The next-generation launch vehicle will use technologies such as multi-time ignition and a staged combustion cycle that allows propellant to flow through multiple combustion chambers for combustion in stages. KSLV-III's fuel efficiency is high, but its main disadvantage is engineering complexity.

The science ministry has proposed a study on a liquid methane engine. Methane has a higher performance than other fuels. Selecting liquid methane is a prevailing trend for recent rocket engine developments due to its affordability, reusability, storability for deep space exploration, and prospects for in-situ resource utilization.

From the design stage of KSLV-III, private companies will work with state engineers as part of the country's Space Pioneer" program aimed at creating a self-sustaining industrial ecosystem and cultivating companies like Space X, a U.S. aerospace company.