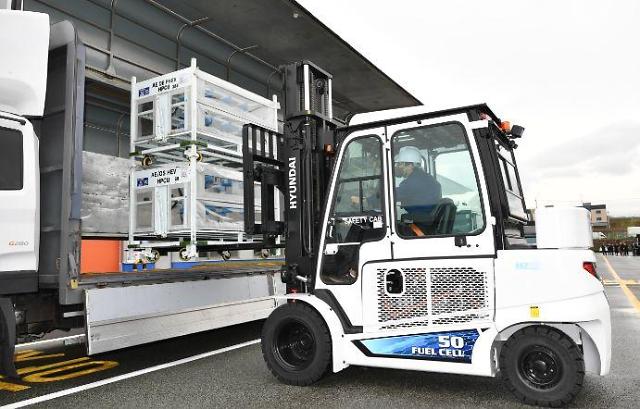 SEOUL -- A five-ton hydrogen forklift equipped with a fuel cell power pack developed by Hyundai Mobis, a parts-making wing of South Korea's Hyundai auto group. The forklift can be quickly charged within 5 minutes and can be used for five consecutive hours on a single charge.

Hyundai Mobis has developed a power pack for forklifts using the fuel cell system of hydrogen electric vehicles. The demonstration sponsored by the Ministry of SMEs and Startups began after a ceremony on November 29 in a facility run by Hyundai Glovis, the logistics wing of Hyundai Motor Group, in the southeastern industrial port city of Ulsan.

The fuel cell power pack mounted on a forklift generates electricity by integrating a cooling device, a high-voltage battery, a hydrogen tank, and a fuel cell stack where a chemical reaction between hydrogen and oxygen occurs. The maximum output is 50 kilowatts. Hyundai Mobis said that the hydrogen forklift has a short charging time and can be operated continuously, increasing productivity at industrial sites. It is eco-friendly and has less noise.

Small fuel cell power packs can be used for drones or small industrial machinery, and medium and large models for excavators or large construction machinery. It can also be used as an auxiliary generator at home or industrial sites, and a major power source for large transportation. Hyundai Glovis will deliver driving data in real time after monitoring demonstration operations. Hyundai Mobis will work out ways to increase marketability and use fuel cell power packs in various ways.