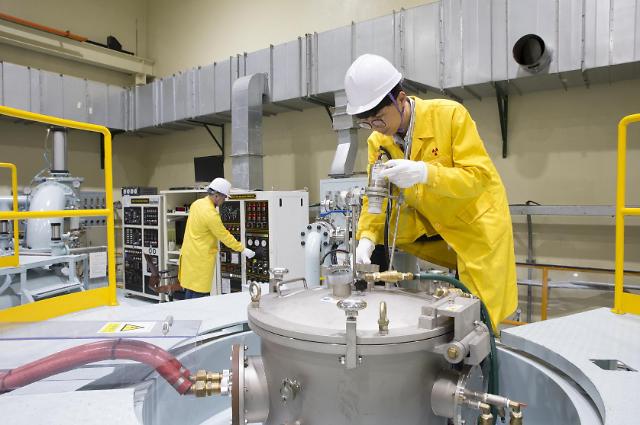 Under a memorandum of understanding with the National Centre for Nuclear Research in Poland, KAERI will supply its low-enriched U3Si2 plate-type fuel in a customized shape to the Maria reactor in Poland. KAERI will develop additional technologies for manufacturing a pilot aggregate of nuclear fuels for demonstration by the end of 2023 and make a final bid as a nuclear fuel supplier in 2016.

It would be the first case of supplying KAERI's nuclear fuel in the form of a "lead test assembly," meaning that it is the last step in performance verification that would lead to exports. "The international community has been looking for a new source of nuclear fuel since the outbreak of the Ukraine-Russia war. South Korea will start exporting nuclear fuel through full-scale research, starting with Belgium and Poland," KAERI head Park Won-seok said in a statement on November 5.

To prevent the use of highly enriched uranium (HEU) for nuclear weapons, research has been carried out to maintain the high performance and density of low-enriched uranium (LEU). France, the United States, and South Korea are the only countries that manufacture high-density, low-enriched U3Si2 plate-type nuclear fuel.

KAERI's centrifugal spray powder technology uses centrifugal force to mass-produce fine and uniform powders by dissolving uranium silicide at a vacuum temperature of up to 2,000 degrees Celsius and spraying it on a high-speed rotating disk. It manufactures nuclear fuel plates with high density by generating impurities less than the conventional method of crushing materials one by one.

In its performance verification test from December 2021 to March 2022 in BR2, a Belgian research reactor with the world's best heat output, KAERI said it was able to maintain its nuclear fuel safely without bursting or radioactive leakage even under extreme conditions that burn more than 70 percent.

Uranium-molybdenum (U-Mo) nuclear fuel has a high uranium density and can use low-enriched uranium. U-Mo fuel can be used for light water reactors with melt-resistant, accident-tolerant fuel with improved safety response. KAERI's U-Mo plate-type nuclear fuel can be manufactured with high density due to the characteristics of centrifugal spray powder. KAERI has tied up with the Belgian Nuclear Research Center, SCK CEN, to verify the performance of its plate-type fuel.

Once the performance of KAERI's fuel is verified, South Korea will be able to export nuclear fuel and reactors using plate-type nuclear fuel. More importantly, there are no special international regulations on 20 percent low-enriched uranium, so it can be used for nuclear-powered submarines installed with a small light water reactor.