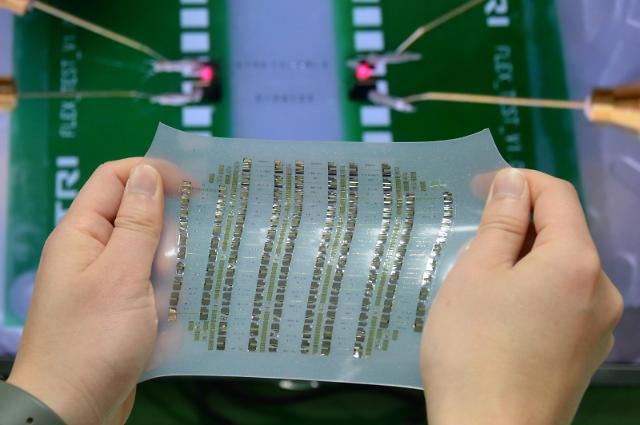 Ordinary semiconductors are circuit boards integrated into a hard silicon chip. Materials such as silicon and metal are favored by chipmakers because of their stability and electrical performance. Elastic chips were researched using organic materials but researchers found it hard to integrate high-density circuits onto oxidized materials.

The Electronics and Telecommunications Research Institute (ETRI) said that its research team has developed a high-performance, high-stability inorganic thin-film transistor (TFT) capable of high-density circuit integration. The elastic semiconductor device can be used for the production of high-resolution stretchable displays.

The elastic semiconductor developed by ETRI has about 15 times more integration density than ordinary elastic semiconductors made of organic oxidized materials. The new TFT used a flexible polyimide circuit board with high-performance inorganic transistors. The crumpled circuit board will be stretched out like a spring. The elastic chip can be stretched to twice its normal size.

ETRI said the production of its new elastic semiconductor complies with standard chip-making. The chip can be applied to other devices including wearables, smartphones, connected vehicles, and healthcare devices.

"The technological gap between South Korea and China's semiconductor and display capabilities is narrowing very rapidly due to the fast development speed of Chinese researchers. We hope this stretchable electronic device technology help South Korea take the leading position in the next-generation semiconductor display sector," ETRI researcher Oh Him-chan said in a statement on December 6.