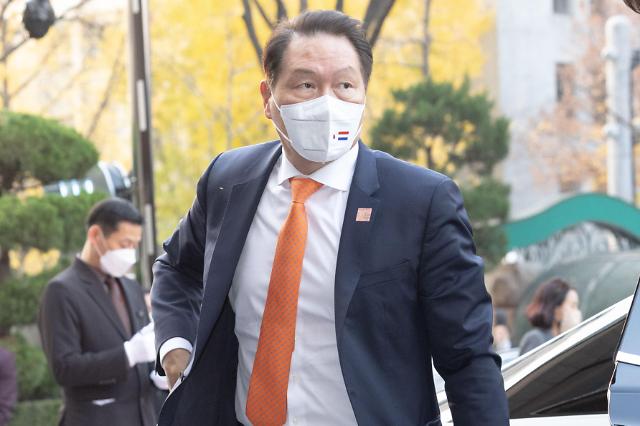 SEOUL -- Chey Tae-won, a business tycoon who controls South Korea's third-largest conglomerate SK Group, secured legal approval to divorce his wife, seven years after the 62-year-old revealed his extramarital love affair and the existence of a child out of wedlock. The ostensible reason for the breakdown of their 34-year-old relationship was differences in personality.

A family court accepted their divorce on December 6, ruling that Chey should pay a symbolic amount of 100 million won ($76,064) in alimony and 66.5 billion won in the division of property, far lower than the amount demanded by his wife. The chairman has argued that shares inherited from his late father should not be subject to property division. There was no word yet on whether Chey's wife would appeal.

The court ordered the division of property in cash, saying it is difficult to say that Chey's wife had actually contributed to the formation, maintenance, and value increase of shares.

The high-profile divorce case has been a hot topic in the town because Chey's wife, Roh Soh-yeong, is the daughter of South Korea's late ex-president Roh Tae-woo, a former army general who joined a 1979 coup led by his military colleague and predecessor, Chun Doo-hwan. The two ex-presidents were convicted in 1996 of mutiny, treason and corruption for their roles in the coup and the bloody military crackdown on a pro-democracy uprising in the southern city of Gwangju in 1980. Both were released from prison in December 1997 on a presidential pardon.

Chey and his wife had a wedding ceremony at the presidential residence in 1988, the first year of Roh Tae-woo's five-year term. Chey filed a request with a Seoul court seeking a divorce settlement with his wife in 2017, two years after he admitted in a letter published by a local magazine that he had maintained an extramarital relationship.

Initially, Roh Soh-yeong, 61, had refused to accept a divorce, but she changed her mind and launched a legal battle for the division of assets in December 2019. She had wanted the payment of 300 million won in alimony and 42.29 percent of shares owned by Chey in SK Corporation, which was later split into SK energy and SK Holdings, a holding company with stakes in various group units. SK Holdings changed its name to SK Inc. in 2021.

At that time, Roh Soh-yeong said in a Facebook post that she decided to find a new life because her son and two daughters have already grown up, not to put up with a "hard and humiliating" time to keep a family. She gained her master's degree in education from Stanford University in California before returning to South Korea for graduate study in Media Communication at Yonsei University in Seoul. As the founder and director of Art Center Nabi, a contemporary art gallery in Seoul, she has organized various exhibitions and cultural projects.