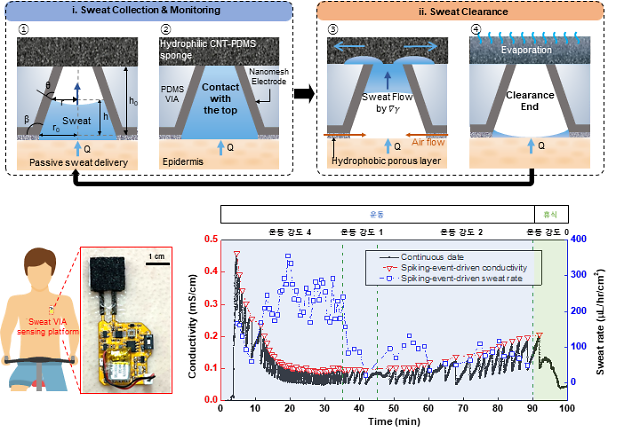 
SEOUL -- A joint team of researchers has developed a low-power-consuming wearable sweat sensor patch that can monitor the health condition of wearers in real time. By monitoring perspiration, the wearable sensor can notify its wearer of possible low blood sugar levels or malnutrition.

Sweat is a composite liquid solution that contains various minerals, nutrients, and chemicals that vary in real-time depending on health conditions. Sweat sensors monitor blood glucose and hydration levels but they spend a lot of electricity on collecting data and communicating with nearby servers.

Researchers from the Korea Institute of Science and Technology (KIST) teamed up with Hanyang University scientists to develop and demonstrate a low-power-consuming wearable sweat sensor patch that uses spike signals, similar to human neurons, to send data only when sweat sensing occurs.

KIST said that the wearable sensor patch can be used for preventing emergency situations like a midnight low blood sugar attack or a heart attack. "We expect the sensor to be used in more energy efficient and smart digital healthcare systems when it is used with other types of sensors," the institute said in a statement on December 7.