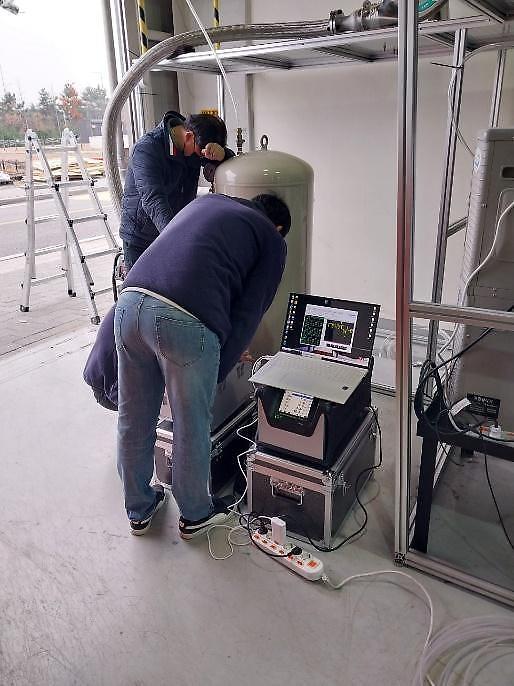 [Courtesy of Ace One tech]

SEOUL -- Ace One tech, a material inspection, measurement and analysis equipment manufacturer in South Korea, has worked out an eco-friendly method to increase the content of hydrogen in synthetic gas produced by the high-temperature pyrolysis of plastic waste. Synthetic gas, or syngas, is a mixture of hydrogen and carbon monoxide.

South Korea's first homemade gas turbine was rolled out for field operation in March 2022. The 270-megawatt-class turbine built by Doosan Enerbility was to be demonstrated by 2025 at a combined heat and power station. Doosan Enerbility has joined a project to demonstrate mixed hydrogen combustion technologies that burn natural gas together with hydrogen. South Korea has launched a task force of private companies, state bodies and research institutes to commercialize diverse gas turbines.

Ace One applied for KTL's certification after the company extracted syngas through high-temperature pyrolysis using plastic waste and produced electricity with a power generation turbine in September 2022. "Through this certification, we are able to officially prove our HR (high-temperature pyrolysis reaction) system," Ace One CEO Kim Ji-soo said in a statement on December 7, pledging early commercialization by producing high-purity hydrogen for fuel cells.

Kim's company remained confident that it can increase the hydrogen conversion rate of syngas to more than 90 percent by complementing facilities, describing its system as more environmentally friendly than steam methane reforming, a method for producing syngas by reaction of hydrocarbons with water.

Pyrolysis is a time-taking process using extreme heat and pressure to break down long-chain hydrocarbon plastic waste into shorter-chain hydrocarbons that can be reused in the petrochemical industry as source materials including high-quality oil. Recycled oil is processed into medium crude and light oil to be used in the production of lubricants and fuels. Pyrolysis recycling is widely researched in South Korea to address concerns about plastic waste.