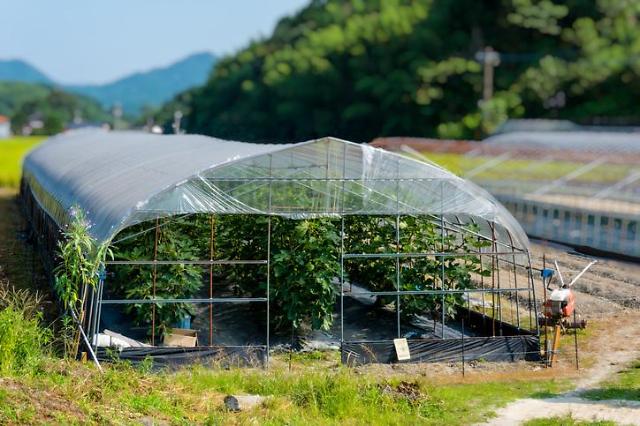 SEOUL -- A state agricultural technology development agency has localized plastic cover films for greenhouses in an effort to reduce South Korea's dependency on foreign raw materials, especially from Japan. The new film's durability is equal to Japanese counterparts and it can be used for more than four years.

Cover films for greenhouses are basically durable plastic films that protect crops from ultraviolet light, rain, hail, and other harmful environmental aspects. Because plastic films are vulnerable to ultraviolet light (UV), many farmers remove them at the end of their farming season and put on a new cover in the upcoming spring.

The state-run Rural Development Administration has localized the multi-layered greenhouse cover film to produce a prototype using polyolefin, a type of plastic polymer.

The agency has formed a joint research team with a domestic agricultural film research association to establish a manufacturing facility for prototypes in Dangjin some 80 kilometers (49 miles) south of Seoul. The localized film will be demonstrated for more than three years to test its efficacy in real greenhouse environments.