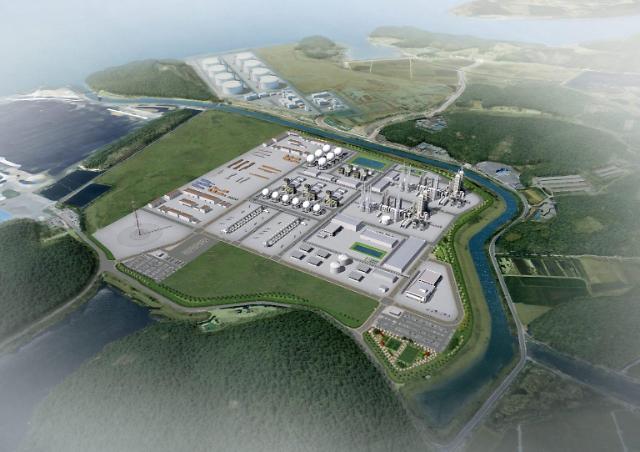 SEOUL -- SK E&S, an energy company affiliated with SK Group, joined hands with a domestic public electricity supplier to build a plant that can produce and liquefy some 250,000 tons of blue hydrogen per year by using the so-called "cold energy" that was used to cool and compress natural gas into liquid form for storage and transportation.

SK E&S and Korea Midland Power (KOMIPO) would invest about five trillion won ($3.9 billion) to build the world's largest blue hydrogen production base near a liquefied natural gas (LNG) terminal in the southwestern coastal city of Boryeong. Government regulations were eased to allow the use of LNG cold energy that would reduce electricity consumption and carbon emissions.

Carbon capture and storage (CCS) technology will be used to remove carbon dioxide generated in producing blue hydrogen per year. Some 200,000 tons of gaseous hydrogen will be supplied through pipelines for hydrogen power generation, and 50,000 tons of liquefied hydrogen for charging stations.

"SK E&S wants to supply blue hydrogen with eco-friendliness, safety, and convenience by reducing costs and carbon emissions," SK E&S' hydrogen business department head Kwon Hyung-kyun said in a statement on December 20. The company aims to produce 30,000 tons of liquefied hydrogen annually from the end of 2023 through a hydrogen liquefaction plant under construction in the western port city of Incheon.