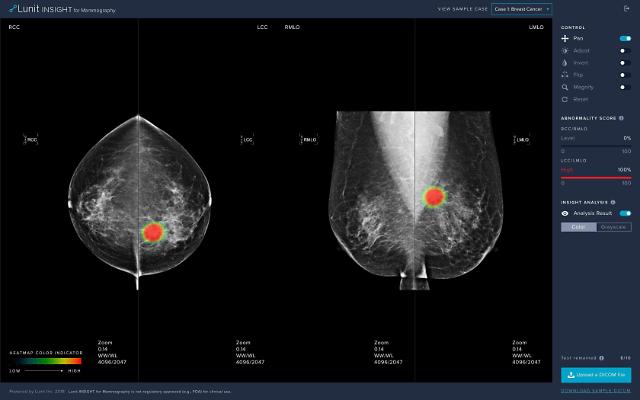 SEOUL -- "Lunit INSIGHT MMG," a solution specializing in detecting breast cancer created by South Korea's medical artificial intelligence company Lunit, was adopted by a medical diagnostic imaging center in Hong Kong and a state-run hospital in Mongolia. The adoption of AI solution can increase work efficiency by replacing human experts who are prone to making mistakes.

Lunit's AI-based solution uses software robots to compare and analyze x-rays and medical images of breast cancer patients and healthy people. When the solution detects an anomaly, human supervisors are notified about the situation and the patient would take extra tests. The solution was approved by the Taiwanese government's green light for commercialization in August 2022.

According to Lunit's datasets containing the analysis of 55,579 Swedish women who had received screening tests for breast cancer using Lunit Insight MMG, the teamwork between a human doctor and the AI solution showed a higher cancer detection rate (CDR) than two human workers' collaboration. The solution's CDR was 4.3 per 1,000 people who received breast cancer screening while the CDR by two human workers was 4.1.

According to data released by global market research firm MarketsandMarkets Research, the global diagnostic imaging market is expected to reach $35 billion by 2026. In October 2022, SEHA, a health service company based in the United Arab Emirates, signed an agreement with Lunit to verify the performance of Lunit INSIGHT MMG. The Middle Eastern hospital agency will consider the adoption after verifying the performance by the end of 2022.