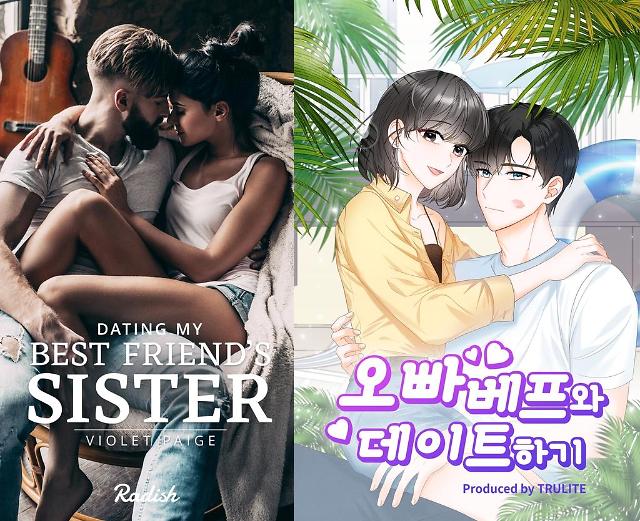 SEOUL -- "Dating My Best Friends Sister," a romance web novel written in English will be recreated into a web cartoon in Korean. The web novel that depicts a secret love story between a young lady named "Kaitlyn" and her boyfriend "Cole" has gained some 400,000 subscribers since it was released in 2019 on Radish Media, a United States-based web novel platform.

Cole is a friend of Kaitlyn's brother in the novel. Kaitlyn had a crush on Cole during her teenage years but the romance starts many years later when they were unexpectedly reunited. The web novel has reached 50 million views on Radish, which was absorbed by Kakao Entertainment, a content and entertainment wing of South Korea's web service company Kakao, in May 2021 for $440 million.

Kakao Entertainment said in a statement that the English content is the first novel to be remastered into a Korean language-based web cartoon. Kaitlyn will be recreated into a South Korean woman named "Harin" while Cole will retain his English name. "We will continuously discover and showcase excellent and unique local novels and enhance synergies of the global stories' IP (intellectual property) business," Kakao Entertainment's story business head Hwang Hyun-soo said in a statement on December 22.

Government data showed that South Korea's web novel market has grown 60 times from about 10 billion won ($7.8 million) in 2013 to about 600 billion won in 2020. One of the most popular global web novel platforms is Wattpad, a Canada-based site with more than 665 million story uploads as of 2021. In January 2021, South Korea's top web portal service operator Naver took over Wattpad.

In South Korea, various web novels have been recreated into webtoons, also known as digital comic books. The text description of web novels can be transferred to webtoon characters' lines. According to the state-run National IT Industry Promotion Agency (NIPA), the global online cartoon market is projected to reach $1.3 billion in 2022.