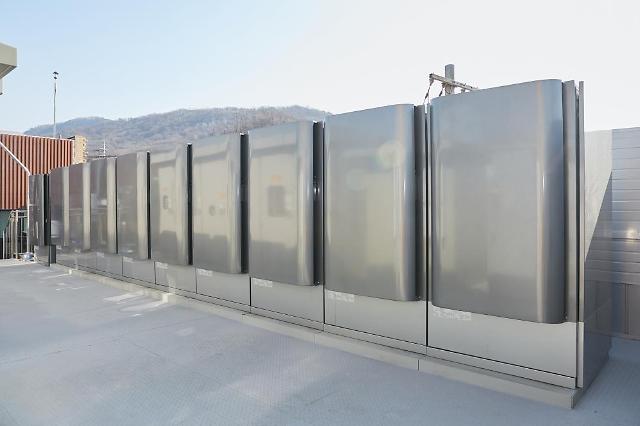 SEOUL -- South Korea's oil company SK Energy has partnered with three other companies to develop and commercialize an electric vehicle charging station that is powered by hydrogen fuel. The so-called urban-type hydrogen fuel power plants are designed to generate electricity using hydrogen and provide power to EV charging stations and nearby power grids.

SK Energy is one of the largest oil companies in South Korea, but the petroleum product distributor had been diversifying its business to both fossil fuel and clean energy sectors during the last decade to gain competitiveness at home and abroad.

Hydrogen fuel generation produces electricity through an electrochemical reaction of hydrogen and oxygen. It is regarded as one of the promising sources of low-carbon electricity. However, many South Koreans do not feel comfortable about having a hydrogen fuel charging station or hydrogen fuel-based power plant near their homes due to fears that an explosion at a hydrogen facility could bring devastating effects to the neighborhood.

According to SK Energy, the small-sized hydrogen fuel power plant will be built in cities' idle spaces and provide electricity to EV chargers and nearby power grids. SK Energy, Korea Southern Power, LS Electric, and Daehan Green Power will use their clean energy know-how while Samchully will take charge of the project's funding.

"Through this alliance, we have acquired a bridgehead for the early expansion of urban-type hydrogen fuel cell convergence businesses," SK Energy's Solution & Platform division head Jang Ho-jun said in a statement on December 28.