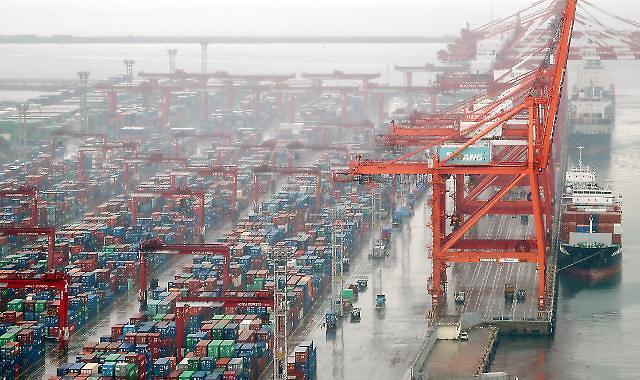 SEOUL -- The South Korean economy is forecast to grow less than 2 percent this year amid growing uncertainties and downside risks.

The Ministry of Economy and Finance and the Bank of Korea (BOK) estimated this year's growth rate at 1.6 percent and 1.7 percent, respectively. These figures are lower than the International Monetary Fund's 2.0 percent projection for the Korean economy and the OECD's 1.8 percent.

The Asian Development Bank (ADB) even came up with a much lower figure of 1.5 percent.

The gloomy projections reflected the fact that the economic situation is aggravating due to runaway inflation, higher interest rates, and a global economic downturn.

The downside risks include a move by the U.S. Federal Reserve to raise its key interest rate further to tame inflation. The high prices of oil and gas as well as other natural resources are also feared to weigh on the economy.

Some economists are even doubtful if the Korean economy can achieve a 1 percent level growth in 2023, considering a set of negative factors such as the prolonged Russian war with Ukraine and the intensifying strategic rivalry between the U.S. and China.

They expressed worries about the country's trade deficit which snowballed to $47.2 billion last year, compared with a trade surplus of $29.4 billion in 2021, according to the Ministry of Trade, Industry and Energy.

The shortfall came despite a solid growth of exports which hit an all-time high of $683.9 billion, up 6.1 percent from 2021, boosted by rising overseas shipments of semiconductors, automobiles, secondary batteries, and petrochemical products.

The trade ministry predicted that the country's exports will decrease 4.1 percent year-on-year in 2023 due to a sluggish global trade, particularly an expected slowdown in the semiconductor industry amid the worldwide economic slump.

Forecasting that the economy will grow by 1.8 percent this year, the Korea Development Institute (KDI), a state-funded think tank, said that there are growing possibility of an economic downturn due to a reduction in exports, the growth engine of the country's economy.

Businesses are much gloomier about the economic outlook. According to a survey of 2,254 manufacturing firms conducted by the Korea Chamber of Commerce and Industry (KCCI), the economy is likely to expand by a mere 1.16 percent.

In a recent interview with The Aju Business Daily, Jun Kwang-woo, chairman and CEO of the Institute for Global Economics, warned of stagflation, a simultaneous phenomenon of stagnation and inflation, which he said is taking place at home and abroad.

He said that in the short term, South Korea needs to focus on heading off a looming crisis. He added that at the same time it is imperative for the country to regain economic strength by improving its national competitiveness in the medium and long term.

Yonsei University economics professor Sung Tae-yoon said that it is necessary for the BOK to hike its benchmark interest rate to bring soaring consumer prices under control. However, he was worried that a higher rate could put more downward pressure on the economy.