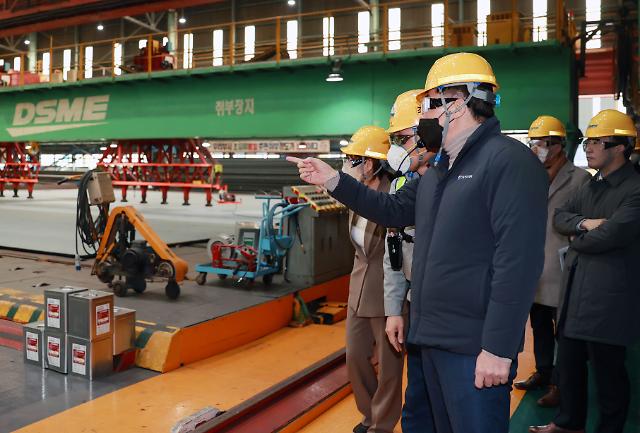 Vice Trade and Industry Minister Jang Young-jin, center, inspects the shipyard of Daewoo Shipbuilding & Marine Engineering (DSME) on Geoje Island, South Gyeongsang Province, January 9. He met representatives of the shipbuilding industry to discuss how to cope with an acute manpower shortage. [Courtesy of the Ministry of Trade, Industry and Energy]

SEOUL -- South Korean shipbuilders are suffering from an acute shortage of workforce when they already secured orders of vessels to be constructed in the next three years.

The shortage has been caused not only by brisk orders, but also by negative factors such as low wages and difficult working conditions, according to industry and labor experts.

They pointed out that more and more shipbuilding workers have quit their job and moved to other workplaces because their wages continued to fall amid the long-term slump in the shipbuilding industry over the past several years, adding that about 14,000 workers need to be supplied for the industry this year alone.

On January 6, the Ministry of Trade, Industry and Energy announced measures to supply more foreign workers to shipbuilders. They include a plan to issue visas for foreign workers faster. However, those steps can only increase the manpower supply by around 3,000, falling far short of required laborers.

The ministry has promised to promote automation and digitalization by utilizing artificial intelligence (AI) and robotics in the shipbuilding sector. It has also committed to fix the low wage problem and help shipbuilders improve their working conditions to attract more workers.

On January 9, Vice Trade and Industry Minister Jang Young-jin visited the shipyard of Daewoo Shipbuilding & Marine Engineering (DSME) on Geoje Island, South Gyeongsang Province, to discuss the issue with representatives of the industry.

The representatives called on the ministry to do more to ease the manpower shortage.

Jang said it is necessary to make shipyards a better place to work by offering better working conditions and creating better paying jobs. He promised to improve the industry’s low wage structure and promote cooperation between prime contractors and subcontractors.

The country’s global shipbuilding market share hit the highest since 2018 when it reached 38 percent. Korea came second in the world orders ranking after China which took a 49 percent share.