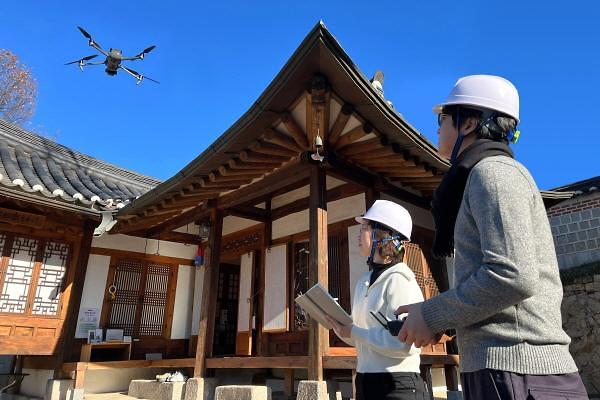 Seoul currently has about 8,000 Hanok buildings. According to the city, most of the Hanok buildings in the capital city were built between the 1930s and 1960s. Hanok consists of tiled roofs, mud-plastered walls, an Ondol heating system that uses residual heat from kitchen furnaces to heat the floor of the house, and a wide front porch called Daechong. The traditional buildings were mostly built in harmony with flower gardens and ponds.

Seoul said in a statement that the city will use drones to help human inspectors when maintenance inquiries are made. Among some 200 Hanok management inquiries, roof-related issues accounted for more than 50 percent. "We will continue to try to discover many different projects so that Seoulites can become interested in Hanok preservation and experience it in their daily lives just like the drone inspection service for Hanok roofs," Seoul's Hanok policy bureau head Kim Yoo-sik said in a statement on January 11.

Seoul said the inspection service would be carried out after the approval of the capital city's defense command. The approval process would take at least four days. Operating drones without permission is illegal in many urban areas including Seoul as it poses a risk of violating people's privacy. Illegal drone flights can also cause severe damage to airplanes. Illegal drone operators can be slapped with a fine of up to two million won ($1,606).