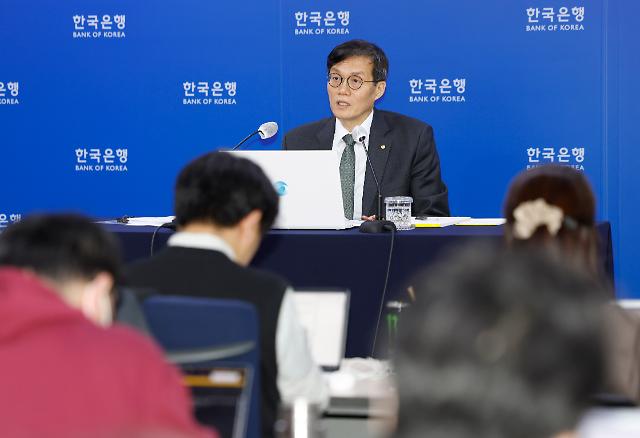 Rhee Chang-yong, governor of the Bank of Korea, holds a press briefing at the central bank’s headquarters in Seoul on Jan. 13, after the BOK decided to raise its key interest rate by 0.25 percentage point to 3.5 percent. [Yonhap]

SEOUL -- The Bank of Korea (BOK) increased its key interest rate by 0.25 percentage point to 3.5 percent to tame inflation on January 13. It marked the seventh consecutive rate hike by the central bank since April 2022.

“We concluded that it was necessary to increase the interest rate to ensure price stability as inflationary pressure still remains high and prices are expected to stay above the target rate for a considerable period of time,” the BOK’s rate-setting Monetary Policy Board said in a statement.

The board predicted that consumer prices will grow by around 5 percent in the first two months of this year, but that they will be stabilized at a lower level to reach 3.6 percent for the entire year amid falling demand and an economic downturn.

However, it pointed out that there are growing uncertainties, considering the severity of the economic slump, the margin of anticipated electricity and gas rate hikes, and the fluctuation of global oil prices and the won-dollar exchange rate.

The board also forecast that this year’s economic growth rate will be lower than the BOK’s November 2022 projection of 1.7 percent, affected by the global economic slump and higher interest rates.

Economists said the central bank had no choice but to ramp up its key rate, considering that the U.S.’ interest rate stands at 4.25 percent to 4.5 percent. The BOK has raised the rate by a combined 3 percent since August 2021. The wide difference could raise fears about capital flight from Korea to America.

Now market players are focused on whether the BOK will conduct an additional rate hike down the road.

Some predict that the BOK’s benchmark rate will go up further to 3.75 percent in February or April as the U.S. Federal Reserve will maintain its aggressive monetary tightening. They said the Fed is likely to raise its rate to 5 percent or higher in the first half of the year.

Others, however, forecast that the BOK will leave its rate unchanged at the present level, given mounting fears about an economic slump.

A further rate hike seems to depend on inflationary pressure, the U.S.’ monetary policy, and the economic outlook.

According to the BOK, consumer prices climbed 5 percent last month, after hitting 6.3 percent in July. The inflation rate has somewhat slowed, but it has remained at the 5-percent level, far higher that the BOK’s target of 2 percent.